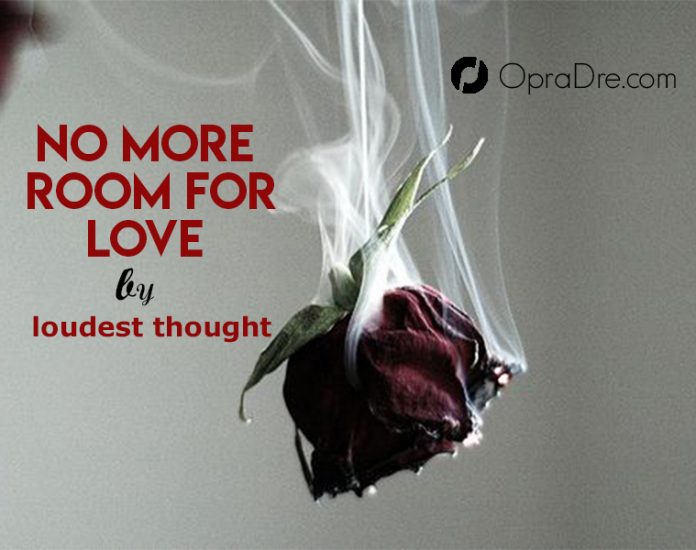 NO MORE ROOM FOR LOVE Written by LOUDEST THOUGHTS

LOUDEST THOUGHTS- No part of this story should be changed or distributed without the authors permission.

We all have the right to love to the fullest, but who we want to love and spend the rest of our lives with is a gamble and a choice. But then when it is forced and betrayal pops up, the path to love changes.

Ego, hatred and frustration sets in. To recover may take forever but entirely a choice of the heart. You decide to get out of your situation or learn to live with it.

NO MORE ROOM FOR LOVE
Prologue

“I’m sorry Katie,” Matt’s enveloped me in her arms while i cried on her shoulders soiling her top.

‘He is gone,’ she sobbed. ‘Andy has finally killed me.’  Katie cried loudly now.

‘Katie do not say that; you are going nowhere.’ She gave her a reassuring smile. ‘You will be fine, just give it time.’

She was just not in the mood for Matt’s soothing words at that moment.

‘Why do i always end up with this kind of bad luck? None of my relationship has ever lasted. One tragedy and broken heart after the other.’ Katie asked herself and got no response from Matts.

She wailed and sat on the floor while onlookers watched vigorously but with a sad tone while murmuring their sorry’s. Matt’s couldn’t figure out how to help her friend at that moment so she sat with her smooching her shoulder.

Andy was her whole life, after all her previous relationships failed. They had many plans for their relationship. There were times they had big fights but they always patch up.

But this time Katie knew it was forever goodbye when his health became a problem. Though she stood by him and got the best doctors for chemo and surgery’s, the last one snatched him off planet earth.

‘When will i recover from this tragedy?’ Katie asked herself again while lying on Matt’s chest.

He was the only man that had accepted her for who she was. He rather gave her the affection she never got from her Dad.

Andy instantly stood up with so much energy and no regrets for what he just did to obviously a good woman. Then he peeped through the theater window.

The light in the room was too bright, hence distracting him. Andy saw his now ex-girlfriend walking blurry far away with her friend consoling her.

Then he felt a hand on his shoulder. ‘Gentle man.’

‘Andy, why treat a good woman that way.’ He asked angrily. ‘From where I stand, that woman loves you. But i do not get why you should fake your own death.’

‘Doctor you would not understand.’ He kept playing the events of the past year in his head.’

‘Help me understand, I know you only paid me to fake your brain tumor and death but you nearly killed her.’

‘Katie is strong and would survive all this.’

‘She spent one hour on drip from the news.’ The doctor told him.

‘I’m sorry, but she is just too much attached to me.’

‘So, you don’t love her?’ Andy’s doctor curiously asked again.

‘I love her but not the way she wants me to.’

‘Then was something wrong with her?’

‘There was nothing wrong with her; I have found someone else i love more than her Doctor. She has been through a lot in the past and this is the best way i could help her recover early.’

‘I must admit you are heartless. Our deal is over Mr. Andy; I will send you back what you paid me. I refuse to be a part of this torture.’ He said and walked out on him.

NO MORE ROOM FOR LOVE
EPISODE 1

‘You have been through enough doesn’t mean you should hold up your happiness. You deserve to be happy.’ Kate’s three best friends told her in a serious tone over one of their coffee mornings.

She just shrugged and continued sipping her coffee, because she had already made up her mind not to listen to Anthon, James and not even Drake the closest among the three friends.

Her parents Mr. and Mrs. Santa were beginning to think she was into women. It has been 4years since Kate’s last break up with her seventh boyfriend.

Each of her relationships thought her enough to put a barricade over her heart, especially the last one. She kept playing the drama that unfolded in Mandela’s house when she went over to drop some of her belongings unannounced since they planned to move in together.

Then she heard Drakes voice and James shaking her.

‘Kate are you with us.’ She came out of her reverie and gave them a fake smile.

Since then he had been there throughout the healing process, and introduced his other two friends. Kate admitted she was yet to heal after 4years since she does not cry about it that much.

NO MORE ROOM FOR LOVE 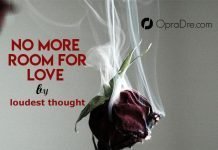 No Room For Love (SEQUEL) by Loudest Thought

No Room For Love Episode 80 by Loudest Thought

No Room For Love Episode 77 – 79 by Loudest Thought