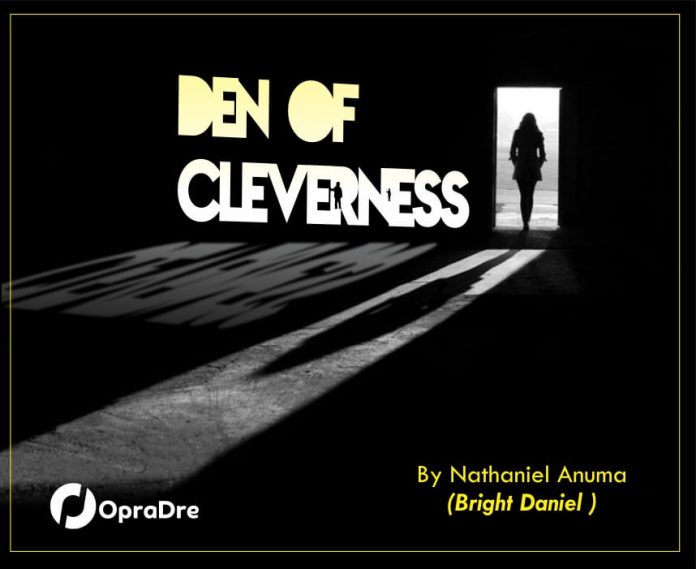 Ikuku was found in a local room where he gave Ken the magical eyeglass. He seated on a chair breathing hastily, while the teenagers stood before him. Already, the two girls had been provided with clothes, even Wisdom too. Within a twinkle of an eye, food was served for them on a local table opposite the large wooden shelves. The speed in which they rushed the food was nothing to write home about, like puppies dragging food on a plate. Only Ken didn’t join in the hungry table manner his friends exhibited. He stood beside Ikuku, watching them lik a steward watching his passengers on a ship.

“Come with me, Uba” Ikuku struggled up from his seat, followed by Ken. They went into another room where he saw different diabolical totems like skull of an elephant and the shell of a tortoise. Just as he fed his eyes with them, Ikuku’s voice sounded, “I’ve done what I shouldn’t have because of you” he limped towards the skull of the elephant, turning his back on the young boy, Ken. “I have fought with our goddess of cleverness which is an abomination. Therefore, I’ve lost my powers” he turned to face him. Though he had a rumpled old face, but looked admiring regarding the white long grey beards. “Mr Uba, use the magical eyeglass on me. I can sense myself closer to my grave”

Ken took a step forward. “I’m sorry I put you through all this unspeakable and calamitous move. I pledge to keep you…”

“Mr Uba,” Ikuku interrupted calmly. “You can’t pledge to keep me alive. Just do what I told you to do”

Tranquility stretched within the sanctum as both men stared at each other. The quietness of the place enabled the transmission of a sound wave made by breakable plates of food used by the other three teenagers in the other room as an indication that their food was about to be exhausted. Nevertheless, Ken brought out the eyeglass, slowly wore it then said, “Ikuku” Instantly, he saw him being shot dead by Otiotio’s men. He slowly removed it, refusing to speak, thus lingering not only the tranquility but also the stare between them.

“What did you see?” Ikuku broke the silence.

Ken averted his eyes, looking at the pocket where he wanted to put back the eyeglass. “You are leaving to the city with us” his voice came boldly without meeting the eyes of his master.

“I said what did you see!!?” Ikuku’s voice increased in anger which sounded like a boiling pot of okra soup in Ken’s ears thereby getting him frightened and scared. Therefore he had no choice but to let the cat out of the bag.

“I saw you being shot dead by a soldier”

Ikuku stared at a window. “That must be soldiers of Otiotio” he swiftly looked at Ken. “What time or date did you see the event?”

“In the next six hours”

He thought for a while, then began to limp towards the door. “You will rest with your friends for four hours then follow the path I showed you before to your city. You shall find a large gate, answer the riddle it carries for it to open before you continue your journey. Do not take any road to the left otherwise find yourselves back into the land of zero”

“Ikuku” ken called him just as he wanted to open the door, but didn’t look back, for he only listened with his ears to hear his statement. “I owe you my life, likewise the life of my friends. We can help you; follow us to the city and..”

“Uba,” Ikuku interrupted for the second time then finally turned only his neck to have a view of his face. “You can’t help me. Do as I’ve told you”

Ken provoked. “Why are you so stubborn!”

“If I am, I wouldn’t have followed you to the den of cleverness!”

Both exhaled allowing another quietness to creep in. Ikuku open the door which sound broke the quietness then left the room.

The teenagers could be seen outside the building, sitting in a roll on a fallen tree. They could see children playing and some grown up people walking around. Wisdom sat close to Jade and Ken before Esther followed. Already, Ken had told them how he was saved by Ikuku because of a promise he made to his late father, but never mentioned the magical eyeglass as the promise. He needed to keep it as a secretary. Therefore he fabricated another promise. Also, they also told the story of how Fred and others died.

“But how were you able to convince him to come for our rescue?” Jade asked Ken.

“Only God knows what he did” Ken stared at the sky to remember..
:
:
FLASH BACK
At the path where Ikuku told Ken to follow to his city, Ken kept talking, giving him more reasons why he should help his friends. As he spoke, tears ran down his eyes. “If you can’t help me rescue my friends then you are no different from Otiotio! You are wicked as well. Those teenagers you see there are innocent! Most of us are the only child our parents have! We are like the only eye in which they see with! If you have only a child would you let him die for what he or she knows nothing about?! There are out there twisting their brain and suffering till death. For what reason? For a nonsense, irrelevant political ambition by one stupid being that calls his name the governor. He’s meant to protect us, not to subject us into brutal death!” he brought down his voice. “Please, I know you can help us. Help your grandchildren from the hands of the wicked” he cried.

Ikuku stared at him. “Go, I’ve told you none of them will come out from there alive” he turned, entered into the tunnel and closed it. Ken waited with tears in his eyes before he began to go to his city. Suddenly, he heard the door of the tunnel opened, Ikuku came back and called on him saying, “Mr Uba, you’ve given me enough reasons to strive and help your friends. I will try but in one condition”

Ken hurried back to him curiously and happily “Name any condition” he said.

“Follow me” they left….
:
:
CONTINUITY
Ken looked at his friends after explaining to them.

“So did you answer the riddle, and what was it?” Esther asked.

Ken smiled. “I never did. It was so difficult”

“Then how come he still followed you?” Wisdom interfered.

“He answered the riddle by himself. Though I later found out that he was only testing me to know if I could answer it, but deep inside of him, he really wanted to help us”

They became silent, thinking of how kind such a man was. They could hear chanting of people from afar carried into their ears by the gentle wind that circulated the place.

“So what was the riddle?” Wisdom broke the silence.

Ken smiled again. “The riddle is: what is harder to catch, the faster you run?” he kept smiling to know if any of them would get it currently. Of course all began to wreck their brains. For close to three minutes, none spoke up or even made an attempt. Suddenly, Esther said, “The answer is your breath”

“Wow” Ken exclaimed. “You are very smart” they all high five for a riddle well answered.
:
:
Wisdom could be seen inside a lonely room, standing at the window in a way he saw a bush from there. The room was as dim as a cloudy weather. Suddenly, sound of footsteps came from behind. Before he could turn, the person had approached closer, standing in the same posture with him. That was jade.

“What are thinking” she broke the silence.

“How to kill Otiotio” Wisdom replied without looking at her.

“Uhm.. ” Jade slid her hair backward. “Just want to thank you again for giving me a reason to answer the last riddles. I would have been dead by now” she paused then continued, “Your words are too sharp and full of wisdom. How do you do it?” both stared at each other as Wisdom smiled. Before he knew it, Jade brought closer her head then kissed him deeply! After that, she left, leaving him dumbfounded not knowing that Esther saw what happened from the door. Therefore when Jade left to another room, she followed, entered and locked the door from behind. She folded her arms, glaring at her.

“I saw what happened”

Jade smiled coz she couldn’t deny it. “I had to do that coz I’m beginning to fall for him”

“Did you tell him what Sandra said before she died?”

“Hello oh” Esther waved her hands. “Did you tell him that Sandra confessed that she loved him before she died in our arms?” she asked again.

“No, though I’ll still tell him” Jade responded, feeling like someone who just snatched someone’s boyfriend.
:
As if a sleeping syrup was blown into the air, both Ikuku and the teenagers slept off, therefore they didn’t know when it was few minutes to six hours. The sound of an helicopter carrying Otiotio’s soldiers woke them up….